Worthing Football Club take a break from league action this evening in the form of a trip to Haywards Heath Town in The Sussex Senior Cup Second round. 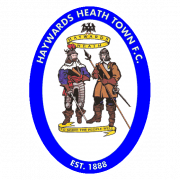 The Mackerels go into the game on the back of a 2-2 draw away to Cray Wanderers in the BetVictor Premier League, with the result being a bitter pill to swallow for The Reds having taken the lead in added time,

“We felt like we’d lost after the whistle but when we broke it down, it was a great game off football particularly by us in the second half so we’re hoping to take that into the game tonight”, said manager Adam Hinshelwood.

The opposition are currently 13th in the BetVictor South East division, having most recently beaten Aylesbury United in The FA Trophy First Qualifying round, and Hinshelwood acknowledges the test that The Blues will bring.

“It’ll definitely be a good challange, even though they’re the league below us we know we’re going to have to be at our best to get a result, and there’ll be players who haven’t played for a while that will be keen to showcase what they’re about.”