Worthing Women made the perfect start to their 2020/21 league campaign, as they hit Hassocks for ten in an action packed affair at a sun soaked Beacon on Sunday. 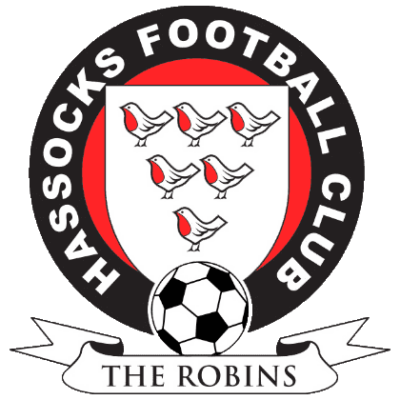 Doubles from Rebecca Thompson-Agbro and Sam Mee, along with strikes from Gemma Worsfold, Caroline Hodgson, Hannah Hewlett, Beth Kincaid, Sara Tubby and an own goal ensured that Michelle Lawrence’s side cruised to victory in their opening game of the season.

Despite being under almost constant pressure throughout the game, it was the home side who created the first real chance six-minutes in. A rare mixup in the Worthing defence allowed striker Jessica Craig a rare sight of goal, however Reds keeper Lucy Apps was quick off her line to thwart the danger and smother her shot well.

Worthing took the lead barely a minute after that opening for the home side, when Hodgson calmly slotted in from close range after good build up play caught Hassocks off guard.

Hodgson thought she had doubled the lead on 10-minutes, however her instinctive lobbed effort was ruled out for an offside in the build-up, before Worsfold’s clever curling effort was well saved by Hassocks’ keeper Sarah Chappell on 12-minutes.

The visitors doubled their lead after the 15-minute mark from the penalty spot, when Tammy Waine was bought down in the box after embarking on a fantastic run from defence. Worsfold stepped up and confidently dispatched her spot kick into the back of the net via a post, giving Chappell no chance.

Worthing made it three just five-minutes later, when Thompson-Agbro smartly cushioned a volley into the roof of the net from close range after Hassocks had failed to clear a clever delivery from Sara Tubby.

The away side had further chances before the break, with Hodgson, Worsfold and Hewlett all going close from set pieces as Lawrence’s side cruised into a comfortable lead at the break.

With her side in control, manager Lawrence ran the changes at half time, with Beth Kincaid, Sophie Grimson and Sophie Humphrey deputising for Natalie Taylor, Mee and Hodgson, with the visitors looking to stretch their advantage further.

Worthing continued to dominate into the second half and capitalised once again on Hassocks vulnerability from set pieces on 49-minutes, when captain Hewlett headed in unmarked from a corner to make it 4-0.

Substitute Kincaid made it 5-0 on 55-minutes. Following another great run and cross from Waine, the young forward made no mistake with a calm close-range finish past Chappell. It was 6-0 ten-minutes later, when Thompson-Agbro rose highest to power in another header from a corner as the home side once again fell victim to poor marking.

With a healthy advantage secured, Lawrence introduced Ashley Kirby and Alice Walford for Worsfold and Hewlett, whilst Mee rejoined the action in place of Tubby.

Mee made it seven from the penalty spot on 77-minutes, when she perfectly dispatched a precise spot kick into the left corner after Kincaid had been recklessly bought down.

Hassocks were once again the creators of their own downfall for Worthing’s eighth goal, when the ball deflected into the back on the net via a Hassocks head from yet another corner on 80-minutes for an own goal.

Worthing added two goals in injury time to make it a perfect ten out of ten showing! Mee once again dispatched confidently from the spot after Kincaid was needlessly fouled inside the area, before late substitute Tubby, coming on for the injured Kincaid, clipped a delightful effort over Chappell and into the roof of the net to round off the scoring.

That was the final action of a pulsating encounter at The Beacon, as Worthing began the season in an emphatic and ruthless fashion to pick up their first three points.

After the game, goal scorer Rebecca Thompson-Agbro was delighted with the way her teammates applied themselves from the offset.  She said, “We worked really hard and were relentless, we’ve got so many good new additions to the team as well, and they made an instant impact for us today. We’re more determined and hungry than ever to be successful this season, and today was the perfect start”.

Manager Michelle Lawrence was also pleased with her sides consistency and confidence. She said “Our experience of Hassocks last season was that they were well organised and hard to break down, the message to the players today was to be patient in possession. The players adapted to a change of system and were relentless in their play. If we are to do well this season we need to be more ruthless and today we were”.

Ahead of their FA Cup tie at Steyning Town next Sunday, Lawrence highlighted how maintaining high standards would be key to success this season. She said, “We played Steyning in our first pre-season match and I was impressed with how their manager encouraged them to play. We will be tagged as favourites, but we cannot allow ourselves to be complacent. Steyning have nothing to lose and we will need to be at the top of our game if we are to progress”. 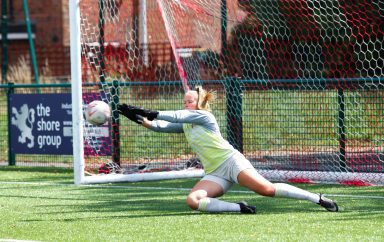 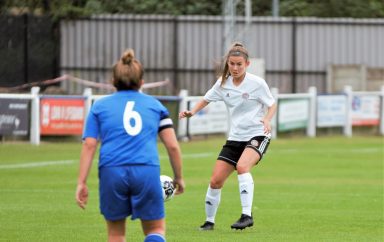